One Glimpse Into The Crystal Blue

American Bad Boy by Eddie Cleveland intriduces us to Lauren and Mack, who have known each other since kids. They fall in love, but life always has a way of changing. Mack goes into the military and Lauren goes another way. 10 years later life and a little bit of destiny steps in and they are reunited. 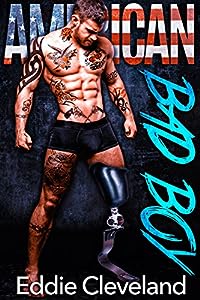 I lost my men. I lost my leg. I lost my career. And all I could think of was Lauren. I left for West Point with two things: a broken heart and a promise to never let it happen again. Now I’m back in Colorado as a war hero. I’m a celebrity. And every woman wants Captain America. So why do I only want her? Even with one leg, Mack Forrester hasn’t lost his swagger. It’s been a decade since he left. But under his tattoos, I still see the guy who broke my heart when he chose his country instead of me. I told myself I was over it. Over him. One glimpse in his crystal blue eyes and I knew it was a lie. Now he wants me back, but ten years is a long time. There’s so much he doesn’t know. Like, that I had his child.