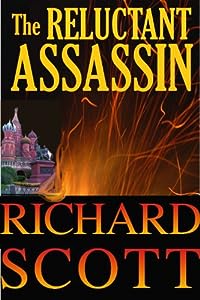 A bestselling novel of intrigue, shadowy politics, and shocking surprises that deftly navigates between the chaotic hope and confusion of post-Cold War Moscow and turn-of-the-Millennium Washington. This is the first book in the Tony Dantry series. The action is fast paced, and there’s enough hi-tech gadgetry to satisfy the most demanding fans of techno-thrillers. Each chapter of The Reluctant Assassin pulls the reader deeper into the story as the author builds tension the way a carpenter builds a house — step by well-crafted step. But this brilliantly turned thriller — reminiscent of Ken Follett’s Eye of the Needle — is more than mindless action. The characters are developed, and the reader cares about them.

Masterfully crafted by Richard Scott, The Reluctant Assassin fuses razor-sharp intrigue with a gripping insight into the confusing chaos that exists between the United States and Russia. 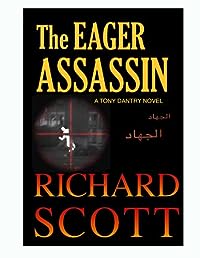 The second Tony Dantry novel, but this time the threat is much closer to home.

Ziad Azim, a radical terrorist from Yemen and educated in London, focuses his jihadist efforts on American targets. Azim’s hero was Osama bin Laden and his goal is to do bin Laden’s 9/11 one better. Azim is smart, polished and elusive. Even his own associates can’t always keep up with him. His targets are calculated to throw fear and terror into every American’s heart. He plans to do this by insuring that no American, no matter where he or she lives, will ever feel safe again. Dantry becomes involved because Ryan Harmon, a friend of long standing and a one-time Navy Seal comes to Tony to inform him that he suspects some of his fellow employees in a prominent high tech firm of being terrorists. Speaking of high tech, as usual in the Tony Dantry novels, you’ll find plenty of the latest spy gadgetry. At first Dantry is not convinced that Harmon’s suspicions have any merit because they seem utterly implausible, but eventually he comes around. Soon Dantry, his girlfriend Joanna Barbeau and Harmon find themselves working alongside the FBI, trying to keep pace with the evil mastermind terrorist threat that manages to keep one step ahead of them at every turn. 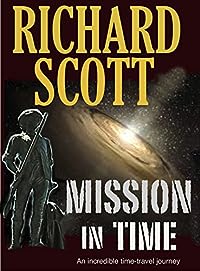 A time-travel adventure that just might make you a believer. The Time Machine by H. G. Wells was fun, as was the enjoyable A Wrinkle in Time by Madeleine L’Engle and Jack Finney’s delightful Time and Again. If you enjoyed these books, you’ll definitely want to read Mission in Time. However, after reading Mission in Time, this might be the first time you actually find yourself believing in time travel. Imagine being sent on a time-travel mission expecting to arrive in a certain period of time and finding yourself in a very different era — a major period in the history of the United States. Imagine finding yourself with people totally unfamiliar with things you’ve been accustomed to all your life: your skills, foods, views on sanitation, means of travel, kinds of recreation and even your vocabulary. Imagine, too, that despite your advantage over the people you meet in history, you find yourself learning as much from them as they learn from you. Whether you’re a time-travel aficionado or a lover of historic novels, you won’t be disappointed with Mission in Time.