A twist between magic and math come together beautifully in the Applied Topology series by author Margaret Ball. You will fall in love with her characters, and the series is full of surprising twists and turns. You will not be able to put the book down, but the great news is once you finish the first book there are more in the series. Enjoy! 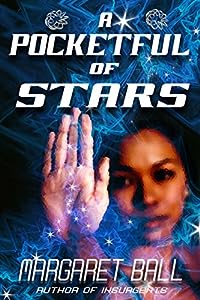 A Pocketful of Stars
by Margaret Ball

Thalia Kostis will be the first to tell you it’s not magic, it’s theoretical math when she walks a Möbius strip through walls to her office at the Institute for Applied Topology. CIA Case Officer Bradislav Lensky doesn’t care what it is, as long as she can help track down a smuggling ring and the terrorists in their safe house in Austin. The other magicians nearby don’t agree, and don’t care for new rivals either! Now Thalia and the rest of her misfit crew are in a race against time, terrorists, common sense, grackles, and their graduate advisor to save the day! 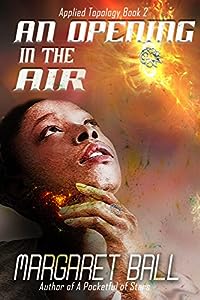 An Opening in the Air
by Margaret Ball

Any sufficiently advanced applied math is indistinguishable from magic…
Protest on campus are usually like grackles – annoying, in the way, and ignorable. But when Thalia Kostis invisibly crashes a meeting, she learns that outside money and organizers are planning for a full-out riot, complete with scapegoats and martyrs. Unfortunately, applied math isn’t magic, and she’s in danger when her cover’s blown . Now she and the rest of the misfits at Institute for Applied Topology must figure out who’s behind this and stop it, before more than just their own building goes up in flames! 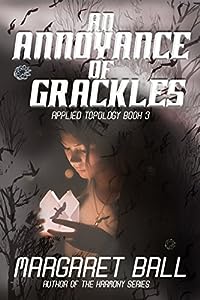 An Annoyance of Grackles
by Margaret Ball

Problems come not as as single corvids, but as full flocks… Life at the Center for Applied Topology is never precisely normal, but Thalia Kostis, Brad Lensky and their coworkers have been enjoying a brief run of peace, quiet, and optimizing the theorems that allow for teleportation and camouflage. Everything is within parameters, until they get saddled with an intern who’s convinced that he’s God’s gift to math and that their applications of topology are illusory.
A rebellion is brewing – but bigger problems are afoot. Their old enemy, the Master of Ravens is back, and has teamed up with a mercenary with a grudge over the Center’s recent disruption of a profitable contract. Together, the two are planning on taking out the Center – and everyone in it!