USA TODAY Bestselling Author Brandt Legg uses his unusual real life experiences to create page-turning novels. He’s traveled with CIA agents, dined with senators and congressmen, mingled with astronauts, chatted with governors and presidential candidates, had a private conversation with a Secretary of Defense he still doesn’t like to talk about, hung out with Oscar and Grammy winners, had drinks at the State Department, been pursued by tabloid reporters, and spent a birthday at the White House by invitation from the President of the United States. Filled with incredible adventures of intrigue, conspiracy, and espionage, this collection by Brandt Legg is not to be missed. Enjoy 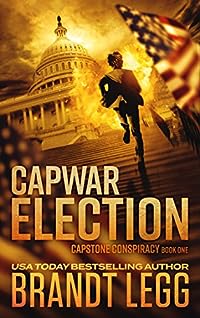 A school teacher running for President.
He can’t possibly win.
But what does he have to lose?
Everything.

After years of divisiveness, the country finally appears ready for a common man to ascend to the highest office in the land. Hudson Pound has no political experience or ambitions, but suddenly finds himself swept into a corrupt power structure he never could have imagined. The media loves him, the public seems mesmerized, everything is going his way until he learns the truth — a desperate realization — that winning is more important than staying alive. 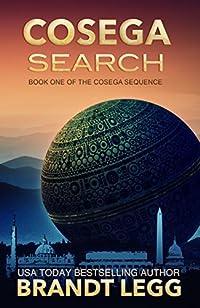 What he sought couldn’t exist, but it does.
What he found couldn’t be real, but it is.
The only thing bigger than his discovery is the conspiracy to stop it!

A breathtaking thriller from the USA Today bestselling author of The Last Librarian.

Ripley Gaines, a brilliant archeologist, has spent his life searching for an elusive artifact to prove his controversial theory. What he finds is beyond imagining. The discovery rewrites human history and promises to change the planet’s future. It must be suppressed.

The most powerful forces in the world align against him, and a deadly competition for the artifact ensues. Capturing Gaines is not enough; he, and everyone who has seen the artifact must be killed. His only hope is to stay alive long enough to decode the Cosega Sequence. Dig far enough into the past… you may just discover the future. 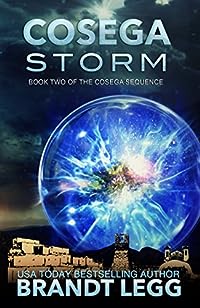 Cosega Storm continues from the frightening final seconds of Cosega Search, the series’ first book. Gaines and Asher, caught in a storm of deceit, corruption and power, desperately struggle to escape. But running isn’t enough. They must piece together the mystery of Clastier’s life, understand the incredible artifacts, and somehow discover what links them all together.

What really happened in the past, and how will it change the future? As each extraordinary secret of the Eysen is revealed, the danger escalates. The more Gaines learns, the less he knows who he can trust. But his most difficult challenge is the paradox of the Cosega Sequence. Failing to decode it in time will cost him his life, yet succeeding means he must die.

Discover enough of the past… you may just destroy the future. 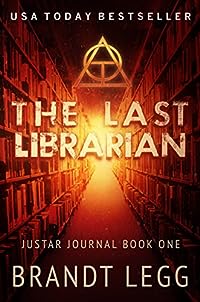 The Last Librarian (The Justar Journal Book 1)
by Brandt Legg

A thought-provoking thriller from the USA Today bestselling author of The Cosega Sequence and The CapStone Conspiracy.

The last library.
The last books.
The last chance.

Eighty years from now there is no war, no hunger, no pollution. After overcoming a series of calamities in the first half of the century, human advancements birthed a utopian society.
The world is secure and Earth’s 2.9 billion people are healthy and happy.

When everything is perfect, the only thing left to fear is the truth.

With a single government ruling the entire planet, using a common currency and one language, the population is unified and enjoying the prosperity that comes with more than seven decades of peace. Free healthcare for all, and guaranteed employment, make the future a dream. But this future is only safe if those in power can hide the past.

The books must be destroyed!

When the single remaining library of physical books is ordered closed and its “dangerous” contents burned, almost no one notices, almost no one cares. The impossible task of rescuing the books, discovering their secrets, and unraveling a coded paradox, is up to an angry author, a brazen revolutionary and the last librarian. If they fail, humanity will lose more than just what is printed on those antique pages… if it survives at all.

Never let them catch you reading! From the USA TODAY bestselling author of The Last Librarian, comes OUTVIEW, the first book of The Inner Movement trilogy. A saga which will leave you questioning everything.

EVERYONE WONDERS ABOUT THE MYSTERIES OF THE UNIVERSE… WHY ARE WE HERE? WHAT HAPPENS WHEN WE DIE?
HOW MUCH IS THE HUMAN MIND CAPABLE OF?
WHAT IF YOU KNEW?

Only the thinnest veil separates life and death. For thousands of years, humans have sought to lift it. Imagine the secrets waiting for discovery, insights into the unknown, and powers beyond the possible.

After the death of his father, the loss of his brother, and mysterious messages, he finds himself enmeshed in a centuries-old conspiracy to hide the truth about what lies beyond that veil.

He must juggle prophecies and mystic knowledge, trace a quest across countless lifetimes, and grasp a complex destiny, before he can unravel the ancient puzzle.

Scores have died to protect the secrets. The trusted whispered the clues, guarded the locations, and hid the keys to what humanity was not yet ready for.

Until Nathan Ryder found a way.

Those protecting the “veil” know he did. And so do the ones who have been searching since before he was born. At the same time, a clandestine group, wielding overwhelming power, wants him silenced.

A mystical adventure… a metaphysical thriller.