Well, I never thought I would say this but I need a fanny pack. Oh gosh. All those times I made fun of people for wearing a fanny pack in the 80’s or 90’s is coming back to haunt me. They had perfectly legitimate arguments, but I just laughed at them and told them they looked ridiculous. Now, years later I am shopping for one on amazon. I never see them for sale in stores. I’m not sure why exactly. They are very practical for when you travel and need a hands free purse that is right there on your belt. It’s great for when you need quick access to your cash and ID. Yup. That’s what my poor friends said to me right before I laughed in their face and threw marshmallows at them. Okay, I never threw marshmallows at them, but I was hoping someone else would throw them at me….I have a sweet tooth going right now. 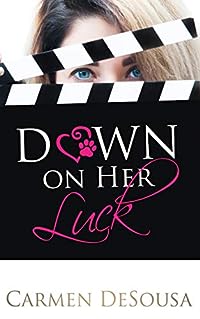 Down on Her Luck: Alaina’s Story (What’s luck got to do with It Book 2)
by Carmen DeSousa

Thirty-nine-year-old struggling actress Alaina Ackerman isn’t just down on her luck today; lady luck has packed up and left town for heaven only knows where. Instead of ending up homeless on the streets of New York City in November, Alaina accepts her mother’s holiday invitation and heads home to Pittsburgh for a much-needed break. Maybe even to give up on acting altogether.

The last thing Alaina expects is to be happy returning home, especially when fate not only tosses an abandoned puppy into her lap, but also practically embeds Markus Klein into her life. That wouldn’t be so bad if she hadn’t spent the last twenty years trying to forget the night they crossed the “just friends” line. Now, torn between a love she thought she lost, and one she never knew existed, that vicious harpy some call fate dangles Alaina’s dream opportunity — a leading role — in front of her. Her only problem… Going after her dream could jeopardize her chance at love.

As if a new puppy, love, and career aren’t complicated enough, Alaina discovers that her mother and sister are keeping a secret from her. The revelation might be just enough to get Alaina’s life heading in the right direction… or send her over the edge.

WARNING: Although there are many adult situations in this contemporary women’s fiction with a hint of humor and romance, if say… something crazy happened and a famous producer adapted this novel into a movie, it would have a PG-13 rating. There are no erotic scenes, no graphic violence, and while there are a few allowed-on-TV curse words, there aren’t a plethora of gratuitous foul words. Oh, and if you were looking for a cliffhanger, you won’t find that here either. While “Down on Her Luck” is a follow-up story to “Some Lucky Woman,” it is a stand-alone novel. Please proceed at your own risk.

The Metronome (The Counterpoint Trilogy Book 1)
by D. R. Bell

Pavel Rostin has taken too many chances. Once a promising physicist, he abandoned science for finance and risked everything on a speculative venture. Careless and rogue, he gambled with his personal relationships. As Pavel tries to pick up the pieces of his life, a call from Russia informs him that his father is dead.
When Pavel follows his father’s footsteps trying to solve the mystery of his death, he turns up some inexplicable clues. The investigation draws him deeper and deeper into his family’s past – and his country’s future. From starving 1941 Leningrad to free-wheeling Moscow of the mid-1990s to bubbly 2006 Wall Street, Pavel uncovers a web of money, murder, revenge and evidence of a plot involving the world’s superpowers. The choices of right and wrong don’t look as clear cut as in newspaper headlines. But is he just a pawn in someone else’s game?
The Metronome is the first book in The Counterpoint trilogy and a prequel to the earlier published The Great Game. The last book in the trilogy, The Outer Circle, will be published in April of 2015. The Great Game and The Metronome are largely independent, with only a minor overlap amongst the characters. The Outer Circle brings the heroes of the two earlier books together to conclude their journey. 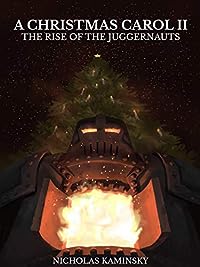 A Christmas Carol II: The Rise of the Juggernauts
by Nicholas Kaminsky

Ebenezer Scrooge was dead to begin with. He did not go quietly. So said the workers at the London Institute for the Insane.

Twenty-five years have passed since the events of Charles Dickens’ beloved classic, A Christmas Carol. Mr. Scrooge — as good a friend, as good a man, as the good old city knew — has passed away. It is common knowledge that he lost his mind and spent his final days in an asylum, cheerfully rambling on about ghostly visitors, but recently there have been whispers in dangerous circles that perhaps old Scrooge was not as far gone as had seemed the case. Ever-more intriguing tales have emerged which suggest the existence of a powerful Relic capable, it is said, of placing the terrifying energies of the spirit realm under the command of whoever manages to wield it.

Meanwhile, “Tiny” Tim Cratchit has returned from an extended trip to the Far East where, unbeknownst to most, he has spent the last several years learning the martial arts in order to strengthen his crippled body and has emerged from his rigorous training a fearsome shinobi ninja warrior. Now, concealing his lethal abilities beneath the persona of the wealthy and affable Mr. Timothy Cratchit, he will need all of his skill — and perhaps more — in order to defeat the looming threat posed by a treacherous secret society and its invincible mechanical army, the Juggernauts.

As these forces of good and evil array themselves for the final, decisive battle for the city, a still greater danger looms unseen and menacing on the horizon. Even with his considerable abilities, Tim will have all he can do to survive, much less prevail, in the dark times ahead. 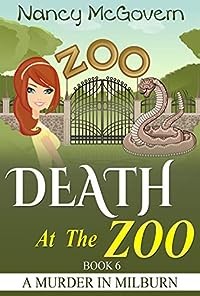 Death At The Zoo: A Culinary Cozy Mystery With A Delicious Recipe (A Murder In Milburn Book 6)
by Nancy McGovern

Recently engaged and with a new diner to run, Nora Newberry has plenty to do in her hometown of Milburn, Wyoming. But when you’re given the chance to spend a weekend in Hawaii with friends… you take it!

And, while it was tough to leave her fiancé and business behind, that’s just what she did!

Of course, she’ll miss both. But she can’t wait to soak up the sun, fun and… murder?!

When an employee at the local zoo is found dead, the victim of an apparent snake bite, at first it seems like an accident. But something doesn’t feel right to Nora, who’d previously met both the dead man and the snake. So, before long, the ladies’ relaxing weekend away on a tropical island is plagued by a murder mystery!

A murder mystery that Nora insists on solving…

Read all about it in Death At The Zoo, the 6th book in Nancy McGovern’s popular culinary cozy mystery series, “A Murder In Milburn”!

* Includes a delicious recipe and an offer to join Nancy’s mailing list, through which you’ll receive a FREE PREQUEL to this series as a Thank You for signing up! 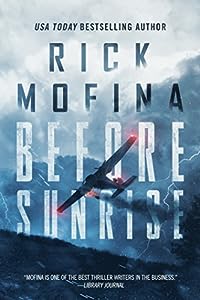 Before Sunrise
by Rick Mofina

In Before Sunrise, Will Fortin of the Royal Canadian Mounted Police is on patrol in southern Alberta. It’s a lonely region where the sky meets the land on even terms, where the landscape exaggerates or diminishes your place in the world. If you’re lucky, trouble would never find you there. If you weren’t, this was your battleground.

This is where Fortin experiences the worst any cop can face, the taking of innocent lives while under fire in responding to a violent call at a farm involving a gun. His life destroyed his guilt unbearable, Fortin, a good man, struggles as a haunted soul, aching to redeem himself.

Years after the shooting, Fortin is assigned to escort a murderer from a Canadian prison to trial in Seattle, Washington. When their plane crashes in the unforgiving Rocky Mountains, Fortin is presented with his last chance at redemption.

Before Sunrise is a powerful, heart-wrenching story of love, heartbreak, courage and enduring human spirit.