A weird encounter is about to shake Terry to the core! His safe childhood background, his loving but obstructive wife, an emotionally risky search with its shocking truths uncovered mean Terry’s predictable life-style is gone for good (or bad). Follow the many colourful characters in this “mesmerizing and penetrating” psychological domestic drama series. If you loved The Dilemma and Girl on a Train, this series is for you. 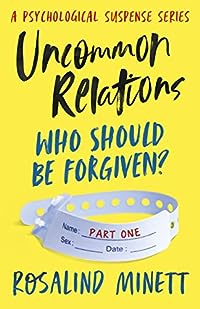 UNCOMMON RELATIONS – Who should be forgiven: A psychological suspense series
by Rosalind Minett

Who does he think he is? Uncommon Relations is a twisty and engrossing series of psychological suspense.

Terry assumes he’s much like any guy in his 20s but a weird encounter is about to shake him to the core! His safe, happy childhood, his loving wife, his safe job, will his emotionally risky search lead to uncovered truths that change everything he thought he knew? Terry’s predictable life-style may be gone for good (or bad).

Transfixed by the unexpected sight of a double on his morning commute, Terry is about to change his humdrum life forever. Excited and disturbed by the mystery, he rushes home to tell his wife, but she’s strangely avoidant, so he begins a search for origins in secret. Who is he, and is it too risky to find out? His predictable life becomes confusing, then bizarre. Soon it will become shocking. Terry’s forced to re-examine what he’d previously believed were facts about himself, and his marriage.

Follow the many colourful characters in Part One of this “mesmerizing and penetrating” psychological domestic drama series. If you loved The Dilemma and Girl on a Train, this series is for you.

Who is at fault, and which of the many characters around Terry need to know?

“Book One of this captivating, but subtly disturbing psychological series will compel you to examine your conscience. Moral dilemmas, bizarrely humorous situations, a labyrinth of human mysteries propel you towards the next in the series.” Amazon reader. 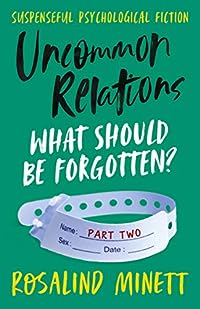 Uncommon Relations – What should be forgotten?: Shocking revelations, excruciating dilemmas.
by Rosalind Minett

Book Two in this gripping psychological series about identity, deception and discovery.
Compelled to uncover his roots yet seduced by the brighter life style of his newly-found twin, Terry has kept his two worlds apart. Now they’ve collided. His wife Gudrun’s shocking revelations propel the second part of this domestic drama, leaving Terry to face excruciating dilemmas and a quagmire of problems. The colourful characters twist and turn him towards an unpredictable ending… which is not a final conclusion. Book Three explores it and takes all the characters further. 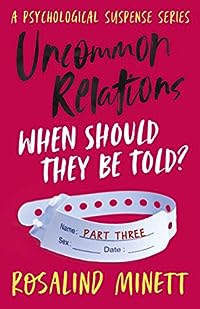 Uncommon Relations. When should they be told?: A psychological suspense series
by Rosalind Minett

TERRY’S MOTHER, WIFE, BROTHERS HAVE BETRAYED HIM. Who can he trust?
Terry has escaped a hounding by the press for a scandal, not of his making. Returning to Heathrow, he trusts interest has died down. He has another guilty secret. This one’s about a wrong he’s committed against his twin, and needs to put right.

First, he must follow his heart. He is hell bent on establishing contact with someone essential to his happiness. But new people he’s about to meet may stand in his way, present new dilemmas, or even help him. Can he win them over and reverse the life-changing revelations he’s been faced with?

Complex family relationships, hidden secrets, psychological tensions abound in Terry’s world. So far, this domestic suspense series has been told from his point of view, now other characters face their dilemmas and show their colours. If there is power play, who will win?

Readers of Lisa Jewell, Celeste Ng and Natalie Barelli should love this series.