Compared to as a modern Nancy Drew, the Skylar Robbins Mysteries have won multiple awards, and several have achieved #1 Bestseller status in Children’s Detective Books on Amazon. Grab your copy today and see for yourself why this amazing series has won so many awards and become a reader favorite. 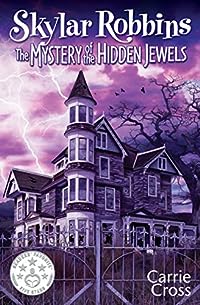 A deserted mansion perches on a steep hillside, overlooking a rocky canyon. Tattered curtains hang behind broken windows, and a turret stretches toward the sky. Three years ago the wealthy owner disappeared suddenly, leaving behind a house full of secrets: A mysterious note, tantalizing clues, a hidden floor, one piece of a treasure map, and a missing fortune in diamonds.

Thirteen-year-old sleuth Skylar Robbins moves into the mansion with her parents and embarks on a new and dangerous mission. Armed with her detective kit, and with the support of her BFF Alexa and a team of secret agents, Skylar sets out to decipher the clues and find the diamonds. Can she outwit a gang of older bullies and find the hidden jewels before they do? Or will the perils of middle school–like battling ruthless Emelyn Peters for the attention of class hottie Dustin Coles–get in her way? 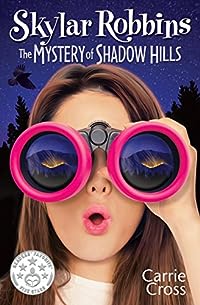 Thirteen-year-old sleuth Skylar Robbins plans to become a private detective like her grandfather. Stuck at her bullying cousin Gwendolyn’s Malibu estate for the summer, Skylar brings her fingerprinting kit, portable spy tools, and her journal for taking notes in secret code. She had no idea how dangerous the next eight weeks would prove to be.

As soon as Skylar gets to Malibu, mysterious things begin to happen. She discovers a hidden garden behind a rusted gate in Gwendolyn’s huge back yard. Her new friend Kat, who claims to be a witch, recognizes magical elements throughout the garden and declares it the perfect place to perform spells.

“We are going to grow gems.”

“Grow what?” There was no way I heard her right.

Ignoring the rising tide, they sneak down to the beach at midnight and search three caves for magic seeds to plant in the abandoned garden. Practical Skylar didn’t believe in magic. Until their spells appear to be working. 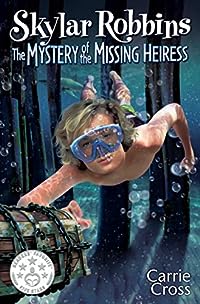 Xandra Collins was rich, famous, and missing. After inheriting a fortune, she vanished without a trace, leaving her 100-year-old mansion abandoned. A frightening enemy had been stalking the wealthy heiress. Thirteen-year-old detective Skylar Robbins moves into the deserted estate with her family, and vows to crack the case. Skylar teams up with her BFF Alexa, and Daniel Gannon — the most brilliant boy in middle school — to solve the mystery of Xandra Collins’s disappearance.

Secret codes and mystifying clues lead to a hidden key. Skylar and Daniel must outsmart Xandra’s enemies and brave life-threatening waves to locate the lock and solve the mystery. Can the team determine how the heiress went missing… before Skylar suffers the same fate?

I opened the slam book and started to read.
Bastiian is having a party next Friday night. Anyone welcome at 3 Palms at 10 is invited. Free food, no parents, and we’re playing My Secret Kiss. Who’s going?
And there was a list of names. Daniel Gannon’s was on it.
My Assistant Detective Alexa pointed at a spot three-quarters down the page. “Sky. A boy-girl party and Daniel’s going. Brendan and Dustin signed the list too. We have to go.”
“Alexa, what’s My Secret Kiss?”
She lowered her voice. “Everyone secretly draws names picking who they have to kiss. Then everyone rates the person they kissed. The bad kissers with the least points get eliminated.”
“No way.” My mind was racing. The disgusting possibilities were endless. Would I be forced to make out with boys I didn’t like, or guys I didn’t even know, just to act normal at a party? Was I crazy for even considering going?
My brain started to tick. I’d paid for some new gadgets with chores money, and I’d gotten others for Christmas. These filled out my detective kit nicely. My night vision goggles might come in handy. The Soundtrap would let us eavesdrop on conversations. Best of all was a canister of Invisi-powder. When you dusted it on your face and hands and wore black clothing, the non-metallic, gray-black powder let you blend into the shadows, so you were completely invisible.
“There is a way,” I said, smiling confidently. “We are going to go to that party. But nobody’s even going to know we’re there.”
Sneaking into the party sounded risky, and pretty scary. But it wasn’t until after it was over and the field trip began, that I really found out the true meaning of terror and danger. 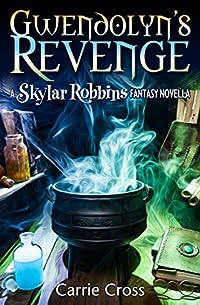 An eighth-grade bully named Gwendolyn opened her witchcraft box and looked at the nest of hair she had stolen from her cousin Skylar Robbins’s brush. She planned to use the teen sleuth’s locks in a revenge spell: Maybe giving Skylar a giant patch of hairy warts. A year of horrendous dog breath. And loud, unstoppable farts whenever Skylar was around a cute boy! Unfortunately, Gwendolyn had skimmed the instructions, and missed a very important step.

With the help of a friendly wizard, Gwendolyn also performed a beautifying spell on herself. But she ignored the old wizard’s warning: “Don’t let your ego turn you nasty. Or the spell will slowly reverse. Or worse.”

By the time school started, Gwendolyn had turned pretty — on the outside. In English, a classmate began his presentation and his nerves got the best of him. After the first paragraph, he stumbled, stopped, and went silent. “I lost my place,” Rudy admitted, fumbling with his notes, and Gwendolyn laughed loudly.

The boy sitting next to her and one row up turned around and gaped at her. “Wow. Nasty,” he mumbled.

“And?” Gwendolyn snapped. Then she shouted, “Ouch!” grabbing her thigh as a splotch of hairy warts exploded painfully onto her skin. A stinky mist burst into the room.

“Ugh!” Ken King exclaimed suddenly, staring at Gwendolyn. “No way — are those turd farts coming out of you?”

“What are you talking about?” she retorted. “I’m not farting,” she said weakly. Gwendolyn did, in fact, feel particularly gassy.

“Or is that your breath?” Rock asked. He covered his nose and mouth and gagged. “It smells like — horrendous dog breath!”

What?! Gwen cupped her hand over her mouth, hoped no one was looking, and huffed hotly into her palm. Sniffed it and almost fell off her chair in disgust. OMG. She gasped. That smells disgusting. It does smell like horrendous dog breath!

Oh, no, she thought. This can’t be happening.

Gwendolyn’s Revenge is a fantasy novella that is a standalone read, and a mini-sequel to Skylar Robbins: The Mystery of Shadow Hills.