They thought they were done with the past. But it’s not done with them. Time To Die (DI Scott Baker Book 1) by Jay Nadal is the first in the gripping crime series featuring DI Scott Baker. Grab your copy TODAY! 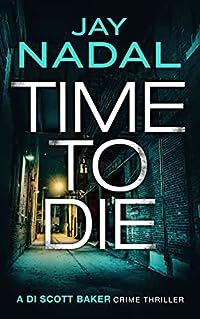 A local criminal is savagely killed, then another…
As the body count grows, Detective Inspector Scott Baker and his team are caught in a race against time as they hunt for a serial killer who is at once methodical and deeply disturbed.

The investigation soon reveals that all the victims have links to a terrible crime which occurred years before. Someone is looking for payback – and they won’t stop till everyone involved is dead, executed in the most brutal manner.

Scott knows he’s sitting on a time bomb – under relentless pressure from the mysterious assassin, Brighton’s criminal underworld threatens to explode, bringing chaos to the streets of the city.

As the killings become ever more savage, can Scott find the murderer before anyone else meets an horrific death?